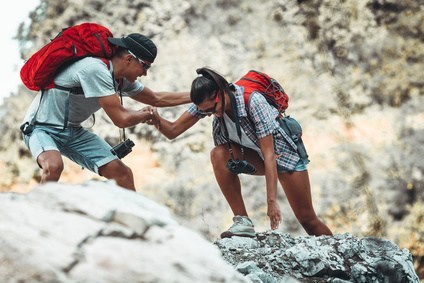 When I first heard about the idea of routine and core issues, it didn’t seem that important. But when I used it in my relationship and in my practice, I got excited. It made tons of sense and it really did help my husband and me cool down potentially heated arguments. Then I found that it worked really well with my patients too.

It all has to do with different kinds of topics that couples argue about. A routine issue has to do with ordinary things that aren’t very important or have to be handled quickly. For example, you have visitors coming in an hour and you need some help straightening up the place. Maybe one of you is really exhausted and asks the other one to put the kids to bed tonight.

A core issue concerns an argument about a strongly held belief or opinion that is hard to change. It’s something where you would say, “It’s obvious. That’s how things should be.” It’s an important part of who you are and how you see the world. Besides religious beliefs, a core issue can be almost anything. One area that can stir up a core conflict is how to discipline the children.

Another area that gets couples into trouble these days is balancing housework and childcare. Now that most married women work, they expect a significant level of help from their husbands. But the husband may have a strongly held belief that it’s wrong for a man to wash dishes and change diapers. It may be old-fashioned, but that doesn’t stop it from being a source of arguments that couples have.

I remember reading a story in a very old magazine in a waiting room about a man whose wife went on a three day trip to visit her parents. They had two sons and he was a biologist. He had the strongly held opinion that men shouldn’t do dishes. But as a biologist he believed that dishes should be washed immediately to prevent the growth of germs and mold.

When his wife got home she discovered his solution to the dilemma. After each meal he cleared the table and put the dishes in their large freezer for her to clean when she got back. I think doing something like that today could get you a guest spot on the Jerry Springer show.

A routine issue isn’t so important to you or is time limited. Routine issues are the problems that turn up on a regular basis in everyday life. Somehow there was an overdraft on your bank account and four or five checks bounced in a row. That’s upsetting, but it can be fixed and the money situation straightened out. Maybe you don’t eat out for a couple of weeks or you skip this weekend’s trip to cover the losses. It’s a routine issue that can be handled.

Now if one of you is a spendthrift and the other a penny pincher, then the overdraft at the bank is connected to a core issue. And that can lead to some serious arguments.

So what’s the value of knowing the difference between a routine and a core issue? It helps us to see which disagreements could be compromised on (routine issues) and which need to be dealt with by getting to know more about each other’s position and personality (core issues).  You can’t work out a core issue with just one discussion or argument. It takes time and making an effort to understand each other more deeply. I think this is a good example of walking in each other’s shoes.

Couples often come into see me saying that they just can’t work things out. What’s really happening is that they are trying to deal with core issues as if they were a routine problem. It may take a bit of arguing, but you can work through a schedule conflict. After all it has to be solved quickly because there is a time limit. However, if all your credit cards are maxed out due to overspending, you’re probably dealing with a core issue that can’t be solved with just one discussion. I found that the best place to start is by pulling out a couple of routine issues and dealing with those.

Susan and David (not their real names) came in to see me saying they needed to learn how to communicate. Susan was feeling overwhelmed at work and at home. They had three children and the youngest was about to enter kindergarten. David thought that with all the children being away at school the majority of Susan’s stress would soon be solved. He didn’t realize that Susan had begun to develop overwhelming resentment towards him. Susan feared those feelings because she did not want to lose her marriage, hurt David‘s feelings or put her children through the pain of a divorce.

Susan said in the past she did try to talk to David about their issues, but every time she tried she would feel unheard and then get really upset because their talks never got anywhere. Now David just thinks that she is stressed.

I could tell right away that they were mixing up routine and core issues. Susan would say, “I’m worn out. I really need help.” David would answer, “Don’t worry. Donny will be in kindergarten pretty soon and everything’s going to be better.” Then Susan would get angry and say, “Just because he’s in kindergarten doesn’t make everything go away. I still have a job and I’m still doing most of the work around here.”

I explained to them about core and routine issues and they both agreed that these were issues they kept coming back to time and time again and the arguments would escalate. It resulted in both of them just simply shutting down and getting nowhere. David was feeling lonely and unloved while Susan was just irritable all the time.

In session I had Susan and David pick up an issue they wanted to work on. They chose to discuss keeping things picked up around the house. I said, “Okay, this can be a core issue. We need to make it into a routine issue first. Susan, if you need help right away, then ask for it. David, when she asks for help just deal with that issue. Don’t get into how stressed she is or how things are going to change in the future. When you’re dealing with a routine issue, you can work it out.

After you’ve worked through a routine issue, you need to thank and appreciate each other. It isn’t necessarily the ultimate agreement, but it is at least some agreement. It is especially important to stay on topic, finish that topic and not go on to another topic without stopping and thanking each other for getting somewhere.

It may also be wise to just pick up the next topic another time. I find that often couples began to get somewhere with their disagreements and feel good about finally agreeing, only to jump into another subject where they began to fight and lose all the goodwill they had just gained.

Turning down the Heat

Making the argument a routine issue decreases the emotional intensity as well. This is one way to cool things down emotionally while giving you both time to learn more about your partner’s position. It can take hours, months or years to work through some core issues. One of my patients told me “I have come to realize that one of our issues has to do with the difference in our personalities. We are uniquely different in this way and we have learned in this case to honor each other’s uniqueness.” But it took them a long time to get to that point.

Susan and David both agreed that they would talk about keeping things picked up around the house. They would limit the discussion to what they could do differently this next week rather than make it a forever agreement. That way the issue stayed routine and not core.

Susan began by saying, “I get home later than you do because I pick up the children after practice. I’d like you to pick up around the house a little bit so I can begin supper right away once I get home.” He said, “Okay.”

At that point I could tell they were not going to get very far because I knew she felt unheard and he felt confused. I told him it was okay to agree but that it would help if the two of them had a discussion about the possibility and feasibility of actually accomplishing that this next week. Susan started to get upset and said, “See. He’ll say, ‘Okay.’ Then he doesn’t do it.”

I motioned to Susan to chill (she knew I had her back) and I encouraged David to talk about how that might work for him. He explained that he does straighten up the house sometimes, but that it goes unnoticed or it’s not good enough. I reminded them that they were talking about what was possible for this next week and that all of the past would not be solved here. But they could stay focused and develop a working plan for next week.

Susan then admitted that David does pick up some and that she doesn’t always appreciate it. She said, “I guess I just come home so tired from work and dealing with the children that I just want more.” David responded by saying, “Yes, I can see you are exhausted a lot. I want to help but I don’t like being treated like one of the kids.” I said, “Wow! That is a slippery slope. Can you say that differently?” He said, “Susan, I want you to be happy and not so tired. What more would you like me to do this next week and I promise I’ll do my best, especially if you promise to assume I really want to help you and not get so upset.”

That really was a starting point for them and they went on to work out an agreement for taking care of the children and the housework just for the next week. What’s more, they actually stuck to the agreement well enough so that they were in much better shape the next time I saw them. I often find that there are two sides to an argument. It did not surprise me that they were both right in their feelings about how the partner was negatively responding to them.

Learning how to handle routine issues is a good start. But you still need to deal with the big questions. So the next blog is going to be on how to handle core issues. And will continue with Susan and David because they had a couple of really good core issues to handle.

Until then, Lots of love,

We use cookies to ensure that we give you the best experience on our website. If you continue to use this site we will assume that you are happy with it.Ok