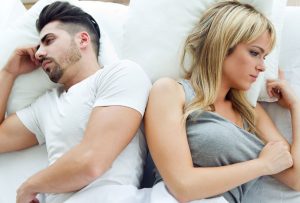 We all know that some women have trouble having an orgasm during intercourse, but did you know that some men have the same problem? It’s called delayed ejaculation (DE) and it’s just as hard for a man to deal with it as it is for a woman.

How a couple deals with the problem depends on the cause. For instance, if DE is caused by an injury, that calls for a different response than dealing with psychological causes. And it may be surprising, but did you know that a lot of DE is caused by a strict religious upbringing?

My article shows how understanding the causes of DE and dealing with them honestly can go a long way to keeping the relationship healthy and happy. And in case you’re wondering, yes, some men with DE do fake orgasm. CLICK HERE